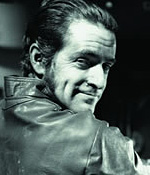 This low-budget, blue-collar, rockabilly space-western. Is also a musical, and it’s pretty funny, too. Shot in black and white, the film follows a roguish space captain, Samuel Curtis (Cory McAbee), who transports cargo from one place to the next. He’s trailed by Professor Hess (Rocco Sisto), our narrator, a sociopath who kills (almost) everybody in his wake.

Curtis’ travels take him all over the solar system. At the bar on the asteroid Ceres, Curtis gets jumped in the bathroom, hears the longest mis-told joke on film, and enters a dance contest. At the all-male mining colony on Jupiter he picks up The Boy Who Actually Saw a Woman’s Breast (Gregory Russell Cook) and escapes just before Professor Hess shows up with his disintegrator gun. Then it’s on to Venus (inhabited only by women and one well-treated man), but not before hiding out in an orbiting space barn.

The whole movie, including the music, is infused with an odd mix of working-class sensibilities and intellectual irony. In music, if you mix the aggression of hard rock with ironic lyrics, you get something like punk. Add a little country, and you have the music from “The American Astronaut.” Maybe the fact that it’s all so incongruous and puzzling (and still funny) is what makes the movie watchable over repeated viewings. (M. Mapes, Movie Habit)