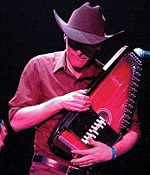 This event is part of the Arts & Culture Week Finale - CU-Boulder's week-long celebration of arts & culture ends with a triple play at Fiske on Wednesday, September 20.