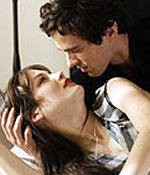 "Russian Dolls," Cedric Klapisch's fluffily enjoyable sequel to the 2002 movie "L'Auberge Espagnole," follows at the frantic heels of Xavier (Romain Duris), now 30 and back in his home town Paris, who writes scripts for a TV soap, ghost-writes other people's "autobiographies" and wants to "take stock" of his life.

Once again the sweet, almost nerdy, presence he was in "L'Auberge," Xavier still plays cherchez la femme, but now his questions have evolved existentially into: Is there a Madame Right in his future or is he doomed to a continuing existence of part-time lovers?

Xavier's romantic uncertainties (with the minor subplot: his professional uncertainties) aren't much to hang a story on, but for the audiences that responded so favorably to "L'Auberge," that's going to be just fine. The movie's whimsical tone and the fractured storytelling that passes for plot are just like modern life anyway: seriocomic episodes that lead to other ones. And that romantic playground -- known in more formal circles as the European Union -- is still a great place to meet people of all nationalities and get their cellphone numbers. (D. Thomson, Washington Post)