Mardi Gras: Made in China

A startling look at the effect of globalization 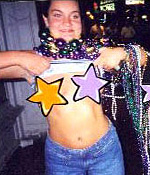 In his documentary "Mardi Gras: Made in China," David Redmon asks random drunken Mardi Gras celebrators in a pre-Katrina New Orleans if they're familiar with the origins of those strings of brightly colored beads so fundamental to the festivities. After receiving some truly maddening responses (such as, "Don't know, don't care — they're beads for boobs, man"), he takes us inside a factory in Fuzhou, China, to uncover the hard labor, sweat and tears that actually go into the manufacturing.

The grim reality he finds is that groups of teenage girls, and a handful of boys, live like prisoners in a fenced-in compound, often working 16-hour days while constantly exposed to styrene, a chemical known to cause cancer — all for about 10 cents an hour. Roger, the Chinese factory owner (or slave driver), is cruel and incredibly delusional; he seems actually to believe that he provides a suitable, even enjoyable workplace for his employees, though they certainly have opposing stories to tell.

A startling look at both the effects of globalization and at a dramatic cultural divide, the film contrasts the lives of the Chinese, hard workers who are forced to make serious sacrifices at very young ages, with indulgent Americans intent on having a good time and seemingly at ease with their lack of awareness. With any luck, this film will manage to open a few closed eyes (or minds). (L. Kern, New York Times)

Mardi Gras: Made in China