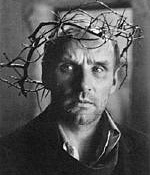 Against the fractured density of Mirror, Stalker sets a form of absolute linear simplicity. The Stalker leads two men, the Writer and the Professor, across the Zone - a forbidden territory deep inside a police state - towards the Room, which can lay bare the devices and desires of your heart. However, let no one persuade you that this is sci-fi or common allegory. The ragged, shaven-headed men are familiar from Solzenitzyn, and the zone may be a sentient landscape of hallucinatory power, but its deadly litter of industrial detritus is all too recognisable. The wettest, grimmest trek ever seen on film leads to nihilistic impasse - huddled in dirt, the discovery of faith seems impossible; and without faith, life outside the Zone, impossible. But hang on in to the ending, where a plain declaration of love and a vision of pure magic at least point the way to redemption. As always, Tarkovsky conjures images like you've never seen before; and as a journey to the heart of darkness, it's a good deal more persuasive than Coppola's.