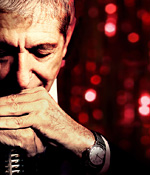 NOTE: Change of venue! We're expecting a big turnout on Sunday for Leonard Cohen: I'm Your Man. Therefore, we're going to show the movie in Muenzinger Auditorium instead of the Film Studies Theater. Muenzinger is a much bigger venue and will accommodate the crowd. We hope to see you there! -- Pablo Kjolseth, IFS Director

Leonard Cohen: I'm Your Man is a bona fide concert film, a record of the musical tribute to the singer/writer staged at the Sydney Opera House in 2005. But the movie, which derives much of its impact from interviews with Cohen, also qualifies as the most literary film of the year.

The 71-year-old Canadian, whose songs have become an indelible part of the musical landscape, comes off as a true poet. I mean this as the deepest of compliments. Cohen appears to be as much literary man as pop icon.

Not only does Cohen, who has the look and unflappable demeanor of Star Trek's Mr. Spock, write eloquent lyrics, but his conversation can dig as deep as his voice. His songs, though often steeped in pain, have a meditative quiet at the center, a sense of calm in the middle of many storms.

To make the movie, director Lian Lunson mixes interviews with Cohen with performances of his music and a variety of archival footage. Among the movie's performers: Nick Cave, Rufus Wainwright and Kate and Anna McGarrigle.

We hear from some of the singers, as well as from Bono and The Edge of U2. Both musicians accompany Cohen in the film's final performance of Tower of Song, regrettably the only tune that Cohen performs.

Although much of the film's commentary sustains the note of praise sounded in music producer Hal Willner's Sydney tribute, we do learn quite a bit about this complex, introspective man. Cohen's father gave him a taste for suits, and he has a reputation as a ladies man (undeserved, he says). He's a slow writer. He spent time in a Zen monastery on Mount Baldy. He's able to look back on his life without undue pride in his accomplishments.

Some of Cohen's songs are personal: In Chelsea Hotel No. 2, for example, he looks back at his relationship with singer Janis Joplin and expresses regret over having written a song about a night of sex.

Lunson's filmmaking probably won't knock you out, and not every rendition of Cohen's songs will satisfy every taste. Talk about words far outweighs any discussion of music. But Cohen doesn't seem one to linger over failure, and I'm going to follow suit. I'm Your Man may be as close as we'll ever get to Cohen on film. (R. Denerstein, Rocky Mountain News)