Looks past the gruff facade of a Seinfeld-worthy diner 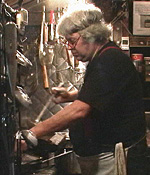 Shot during summer 2002 as Shopsin's lost its lease after 32 years and prepared to move to new premises, the film also serves as a testament to an unconventional but oddly functioning model of American family, with all five of Kenny and his wife Eve's children either working at or frequently passing through the diner. No less distinctive a personality than her husband, Eve is an extremely likable ex-hippy, as warm and generous as Kenny is prickly and suspicious, and her death during the filming gives "Killing Flies" a melancholy poignancy.

A cramped corner location in the West Village, Shopsin's began life as a dry goods store but morphed into an eatery after Kenny began preparing sandwiches for extra cash. It evolved into a gastronomical carnival with 900 items on a high-cholesterol menu that marries classic trailer trash and Jewish cuisine with pan-ethnic experimentation, all whipped up in a claustrophobic kitchen on equipment that would make Martha Stewart blanch.

Filming on minimini DV in a rough-and-ready style, often with the hand-held microphone in the shot, Mahurin assembles an affectionate portrait of Kenny, his brood and his singular worldview as the profanity-prone chef expounds on life, death, sex, terrorism, waste disposal and insect extermination. Despite the gruff facade Kenny puts on for customers -- who are by no means always right in his rigid rule book -- Mahurin quietly gets under Shopsin's skin to reveal his deep attachment to his family and his anxiety about starting fresh in a new location. (D. Rooney, Variety)