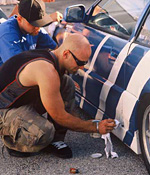 Imagine Vin Diesel and Paul Walker's street-racing saga "The Fast and the Furious" transformed into a lyrical, stylized romantic tragedy and one would have some idea of what Joey Curtis' unsparing yet beguiling "Streets of Legend" is like. Of course, street racing is steeped in danger and folly, but Curtis, who was a street racer, and his virtuoso cinematographer, Derek Cianfrance, know how to exude the intoxicating allure it presents to young people, crossing ethnic and socioeconomic lines in its appeal.

Victor Larios' Chato is a first-generation Guatemalan American still living at the family home with his mother, grandmother and younger brother. A solid, chunky youth with a shaved head and steeped in machismo, he is intensely drawn to his girlfriend, Noza (Brihanna Hernandez), a beautiful, proud Latina princess possessed of a deeply religious and poetic nature. She is aware of her power over Chato yet is essentially a dreamy innocent. After Chato tries to fake a drug test and lands in jail for violating his probation, Noza is devastated to learn that he casually cheated on her with her best friend. Chato's absence and betrayal paves the way for Noza to respond to the attentions of another street racer, Quattro (Robert Beaumont), a handsome youth who lives with his widowed father (Gary Brockette). Incarceration, however, only inflames Chato's love for Noza, whom he regards as his possession.

The film's plot is but a point of departure for a celebration of the exhilarating emotional power and profoundly fatalistic attraction of racing and romantic passion. "Streets of Legend" catches fire in an instant and affords tremendous visual, visceral charge. Even though it is ultimately anything but an endorsement for street racing, the movie stunningly captures its undeniable excitement. "Streets of Legend," which is dedicated to the memory of experimental filmmaker Stan Brakhage, who taught Curtis at the University of Colorado, is a terrific calling card for the young director. (K. Thomas, L.A. Times)