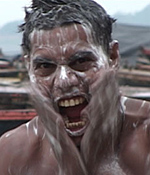 The notion of Tibet as an oasis of tranquil spirituality victimized solely by Chinese oppression is challenged by "Angry Monk," Luc Schaedler's Swiss docu. Pic examines legacy of Gedrun Choephel, a Buddhist monk whose writings argued against the perceived fundamentalist stagnation of 1930s-'40s Tibetan culture. His works, lost or banned for decades, are finding new favor in a homeland where nationalism is creeping back in the wake of a slight relaxation of brute autocracy by Chinese authorities. Available in both German and English-language forms, docu also has a broadcast-friendly 52-minute cut in the works.

Born in 1903, Choepel was thought the reincarnation of a famous local monk, at age 4 commencing 30-plus years of religious study. But his brilliant debating skills sprang from an open-minded curiosity and restlessness at odds with the Tibetan leadership's traditional mindset. In 1934, he entered civilian life, traveling in India and returning home a controversial author. Spirit broken after three years in prison, he died as the Chinese invasion of Tibet was complete in 1951. Input from historians and surviving intimates, archival material and handsome latter-day footage retracing Choepel's journeys mix smoothly in polished package. (D. Harvey, Variety)