A work of rippling cinematic muscle by Martin Scorsese 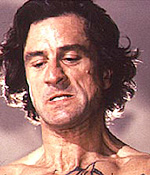 Martin Scorsese's "Cape Fear" is a work of rippling cinematic muscle. It's a brutal, demonic film with a grip like a vise; it grabs you early, its fingers around your throat, and never lets go. No one can give evil a more voluptuous surface than Scorsese; he's a dread master, and with "Cape Fear" -- his remake of the 1962 thriller with Gregory Peck and Robert Mitchum -- he's delivered a ravishing thesis on the anatomy of terror. If the director has set out to horrify us, then he's succeeded, and made us laugh at ourselves for being so spooked. "Cape Fear" scares you, all right, and more -- it makes your liver blanch.

The movie premise is as straightforward as it is tough. Sam Bowden (Nick Nolte) is an attorney in a small Southern town, who 14 years ago unsuccessfully defended a brutal maniac named Max Cady (Robert De Niro) on a rape charge that, after being reduced to battery, sent him to prison. At the time of his trial, Cady was illiterate, but during his imprisonment he has become a bookworm, reading literature, philosophy and, in particular, law. All the while, Cady has dreamed of taking his revenge against Bowden, whose shoddy defense, he believes, is the reason he's lost his wife, his child and a big chunk of his life. And so when Cady is finally released, he makes a beeline for Bowden's peaceful home town, looking for a little payback.

At its heart, "Cape Fear" is a genre exercise, and because it's so expertly executed and so visually alive, the movie still gets to us. Even here, it's impossible to be indifferent to Scorsese's work; he's a virtuoso, and for some filmmakers this movie would stand as a pinnacle work. (H. Hinson, Washington Post)