The disturbing and compelling cult phenomenon 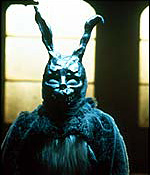 "In 2001, 27-year-old writer-director Richard Kelly created a pop classic of American suburban paranoia in Donnie Darko, now on rerelease – a movie with something of Back to the Future, Twin Peaks, American Beauty and of course Harvey. This film made Tears for Fears hip (kind of) and had a tremendous discovery in the young Jake Gyllenhaal, playing Donnie, a high-school kid on medication for the symptoms of paranoid schizophrenia. When a jet engine falls out of the sky one day on Donnie’s house, an event that would have killed Donnie had he not been sleepwalking around the local golf course, it creates an anxiety spasm that ruptures his already fragile wellbeing and he hallucinates a huge, scarily voiced rabbit that tells him to commit acts of violence.

I remember being a bit reserved about Donnie Darko the first time around, perhaps because we were suffering Gen X overload in those days. Watched again now, it is captivating. Donnie Darko has a political and satirical flavour that wasn’t as strong at the time: it is set in 1988, the chastened end of Ronald Reagan’s comforting reign. There are acid references to Michael Dukakis and Dan Quayle. As for Kelly himself, he made a flawed but interesting movie with Southland Tales in 2007 but a ropey Twilight Zoney film called The Box in 2009. Since then … not much. Maybe the rereleased Donnie Darko can help revive this talented director’s career."