A beautiful and fascinating adaptation of the epic legend 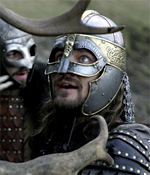 The time is 500 A.D. The place is northern Europe. Beowulf of the Geat tribe is a hero in the prime of his life. He learns that the king of the Danes is having trouble with a vicious troll, so Beowulf and his men travel to Daneland to do battle. Having lost a score of healthy men to the troll, The Danes welcome Beowulf, although they don’t seem to be telling him everything. A whore with second sight, brought to Daneland by a man whose nickname was “three legs,” fills in some of the details for the visiting hero.

It would be easy to imagine this film skewing too close to an action movie or a special-effects extravaganza, but the telling of this story is better than that. Granted, action and special effects would not have ruined it — on the contrary, the film could have done better on both counts — but the moral simplicity that goes along with movies aimed at 13-year-old boys would have ruined it.

Instead, the story reveals a surprising complexity and maturity. (Not having read the source material, I’m not sure whether it’s in the material or in the adaptation.) Grendel, for example, is anything but a simple monster. He has a name. He has issues. We know enough about him that we can sympathize with him. (A novel and a recent opera told from Grendel’s point of view see the same thing).

Beowulf & Grendel has epic possibilities, though granted, not an epic budget. It’s a wonderful piece of time travel, and it tells a good story well. I’m disappointed, but not surprised, that it’s not getting a bigger release. Perhaps I’m more fascinated by the dark ages than most. I like to see what human life was like without civilization, and a well-produced movie is an excellent way to take a peek. I liked The 13th Warrior and really wanted to like The Reckoning. I was even one of the few critics with a soft spot for the movie adaptation of Crichton’s Timeline. And perhaps I’ll be in the minority for Beowulf & Grendel, too. (M. Mapes, MovieHabit)