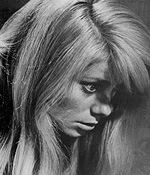 Roman Polanski's directing career has been so eclipsed by his personal excesses that we tend to forget he's responsible for some of the most disturbing, stylish films of the '60s and '70s. ``Rosemary's Baby'' and ``Chinatown'' cemented his reputation in the United States, but it was ``Repulsion,'' a 1965 psychological thriller that introduced Polanski to English-speaking audiences.

A wicked tale of madness and female paranoia, ``Repulsion'' stars Catherine Deneuve (Polanski draws a frightening performance from Deneuve, who was only 21 at the time) as a timid, sexually repressed Belgian girl living in London with her callous, self-absorbed sister (Yvonne Furneaux). Too shy to look people in the eye, she goes through the paces of her manicurist job with head bowed, lunches alone on fish and chips, and hasn't a clue what to say when a man approaches her. Deneuve rapidly goes mad, and when a potential suitor arrives at her apartment she bludgeons him with a candlestick and dumps him in a tub full of water.