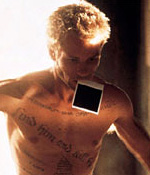 Mushrooms won't help when it comes to "Memento." This mesmerizing mind-bender - it's really a mind fuck as well as a new classic among thrillers - won the screenwriting award for its British writer and director, Christopher Nolan, 29, who based the script on a short story by his brother, Jonathan.

The movie features a tour-de-force performance from Australian actor Guy Pearce - he was the tight-assed cop in "L.A. Confidential" - as Leonard Shelby, a former insurance investigator who is out to find the man who killed his wife. Sound conventional? Think again. From the start - and cheers here to Wally Pfister's camerawork and Dody Dorn's editing - this jolting jigsaw puzzle of a movie grabs you and won't let go. The stunning opener involves a murder and a Polaroid of the body. Then Nolan runs everything backward. The photo slips back into the camera, a bullet is sucked back into a gun barrel, and Leonard starts living in reverse. Don't leave your seat for popcorn or a pee or you'll miss a crucial plot point.

And pay no attention to what Leonard says. A head injury sustained while he was trying to protect his wife has left him with short-term memory loss. As he tells Burt (the sly, funny Mark Boone Junior), a clerk at the seedy L.A. motel where Leonard holes up, "I know who I am, I know all about myself. It's just, since my injury, I can't make new memories. Everything fades. If we talk for too long, I'll forget how we started. . . ."

To stay focused, the understandably paranoid Leonard takes pictures, writes notes to himself and even tattoos messages on his body, such as "John G. raped and murdered your wife." Strangers are a real hazard for this guy. The sexy bartender, Natalie ("Matrix" babe Carrie-Anne Moss is pure femme fatale), takes him to bed but screws more with his psyche. The snarky undercover cop, Teddy (Joe Pantoliano steals every scene he's in), offers help, but his motives seem suspect. And what's with those flashbacks in which Leonard denies the insurance claim of Sammy Jankis (Stephen Tobolowsky), whose memory loss now mirrors his own? "Memento" is a movie that demands we trust no one. In only his second film, after 1999's "Following," Nolan stages scenes of dizzying suspense that resonate with raw emotion. His reverse action isn't a trick - it's a way to put us inside Leonard's head. Like the best filmmakers at Sundance 2001, Nolan leaps into the wild blue and dares us to leap with him. Go for it. (P. Travers, Rolling Stone)