Prequel based off the brilliant Comedy Central TV Series 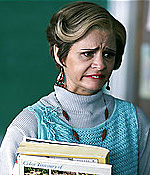 Jerri Blank is a 47-year-old ex-con junkie-whore, but that doesn't mean she doesn't have a heart. When Jerri (the incomparable Amy Sedaris) and her impressive overbite return home from a 32-year prison stint, she finds her dad (Dan Hedaya) has lapsed into a "stress-induced" coma, which his faithful doctor (Ian Holm) believes is irreversible. Unless, that is, Jerri can pick up her life where she left off: returning to high school and becoming "the good girl she never was and never had any interest in becoming."

This setup will be familiar to the slavishly devoted fans of "Strangers With Candy," the cult favorite that ran for two years on cable TV's Comedy Central. Now, thanks to the advances in movie technology, those same fans, not to mention those who've never seen the show, can spend a full hour and a half communing with 9-foot tall images of Jerri's orthodontic challenges, her lazy eye and her questionable hygiene.

While comedy may be the most subjective of all movie genres, I feel enormously confident saying this: "Strangers With Candy" is easily the wittiest, most ridiculous and best-written comedy of the year. I normally don't commit this sort of thing to public forums, but one scene made me laugh so hard I snorted water out of my nose. I believe that's never happened before. (J. Reaves, Chicago Tribune)