Who Killed the Electric Car?

I can't believe I cried over a car 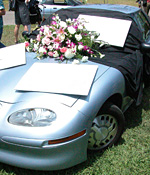 Less than 10 years ago, the electric car looked like the coming thing. General Motors had an attractive electric car on the road, and it seemed inevitable that these cars would get better, less expensive and more practical as time went on. California, responding to a pollution crisis, had a law on the books requiring that 2 percent of the state's vehicles be emissions free by 1998 and 10 percent by 2003. Everything was in place -- and then the electric car disappeared.

"Who Killed the Electric Car?" is a balanced examination of the reasons for the electric car's disappearance, reasons that include corporate collusion and greed, governmental spinelessness and oil company propaganda -- but also consumer indifference and the limitations of the vehicles themselves. Rather than try to devise a conspiracy theory that lays the blame on one party's doorstep, director Chris Paine examines the issue from a number of sides. He makes a virtue of the issue's complexity, by structuring the film as though it were a murder mystery with a host of suspects. In fact, he gives enough evidence for the viewer to come away with an understanding of the situation that's different from his own. (M. LaSalle, San Francisco Chronicle)

Who Killed the Electric Car?