The World According to Shorts

Short films from around the world 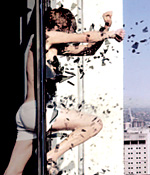 The six films in the program have been chosen from previous programs, with many considerations in mind—among them, a balance of geographical origins, tones, styles and genres.

La Perra
Hugo Maza, Chile, 17 min. A couple with an empty life make up a story about the new maid in order to satisfy their sexual obsessions.

Ring of Fire
Andreas Hykade, Germany, 15 min, animated. Replete with outrageous sexual imagery, this tale of innocence lost and ultimately redeemed is accompanied by a lyrical voiceover (in appropriate cowboy drawl) that seems to have only the loosest of connections to the action on-screen.

United We Stand
Hans Petter Moland, Norway, 9 min. Eight old timers come upon a young woman stuck in a swamp. This short film was inspired by the Norway's Labour Party, and is a part of the collective feature film Utopia: No One is Perfect in the Perfect Country.

Antichrist
Adam Guzinski, Poland, 28 min. A group of boys play in a barren, seemingly post-apocalyptic landscape. The group's leader believes he is the Antichrist. He goads the others into increasingly daring games until events spiral out of control.

The Old Woman's Step
Jane Malaquias, Brazil, 15 min. An old lady travels from the fishermen's village where she lives to the city to sell a chicken so she can buy her grandson a present.

The World According to Shorts