With director Josh Aronson in person 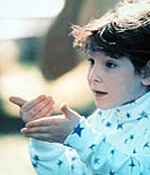 Josh Aronson's thoroughly engrossing documentary "Sound and Fury" is as much about children's rights as it is about the impact of cochlear-implant technology on a family in which deafness runs through three generations.

Peter Artinian, his wife, Nita, and their three children are all deaf. When their five-year-old, Heather, asks to have a cochlear implant, they feel betrayed by her desire to become part of the hearing world. But they try to keep an open mind while investigating this new technology, which uses tiny computers to enhance hearing.

The earlier the procedure is performed, the more effective it is in enabling speech acquisition. The conflict between Heather's parents and the hearing members of the Artinian family becomes more heated when Peter's hearing brother and sister-in-law, Chris and Mari, decide to give their 18-month-old deaf son the implant despite the protests of Mari's deaf parents.

Aronson translates sign language into voice-over that interprets not only what deaf people say but the emotional charge behind their words—which, paradoxically, reinforces the barrier between the hearing members of the audience and the deaf people in the film. (A. Taubin, Village Voice)