An in-depth look at the world of coffee and global trade. 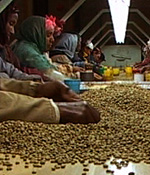 As coffee drinkers know, not all beans are equal, but the meaning of inequality gets an entirely different spin in Marc and Nick Francis' handsome and astute doc, "Black Gold." The Brit brothers study where some of the world's finest beans -- including Harar, from southern Ethiopia -- are grown and how they're marketed, and ask why people producing such a first-class product live in near-starvation conditions. The complicated answers are too great for any single feature doc to encapsulate, but pic's educational value and filmmaking prowess assure it a good fest season followed by a fine vid harvest.

"Black Gold" tells of the fair-trade coffee movement, in which growers arrange to directly receive a higher percentage of sales revenues by cutting out as many middlemen as possible.As rep of the Oromo Coffee Farmers Co-op Union, which embraces 74 southern Ethiopian co-ops and more than 70,000 farmers, Tadesse Meskela travels between the grassroots and the international market buying his groups' prized beans. He's in the ideal position to observe the growers' thin margin of survival and, contrapuntally, third-party brokers repping such coffee giants as Nestle and Kraft -- in tandem with the coffee commodity exchanges in New York and London, where daily prices are set -- working to maintain low prices.