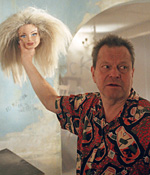 Made back-to-back with Terry Gilliam's somewhat commercial but roundly panned "The Brothers Grimm," indie-produced "Tideland" sees the fanciful helmer overindulging his dark side with a slice of Gothic nastiness. Story about an imaginative orphan living alone under open skies is anchored by an ace perf from tyke thesp Jodelle Ferland, and features the helmer's signature spooky production design. Way too disturbing for kids and too weird for most grown-ups, "Tideland" is likely to wash up in boutique distribution where Gilliam's name will pull in only his most devoted fan base.