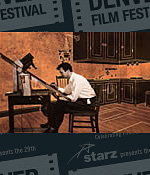 It’s no stretch to describe Norman McLaren as the Walt Disney of experimental film. Though he wasn’t the first master animator to experiment with form and style (Emile Cohl and Oskar Fischinger got there first), McLaren was perhaps the most inventive, prolific and influential avant-garde filmmaker of his generation. In Canada, where he did the bulk of his work, McLaren is a monumental figure. Piers Handling of the Toronto Film Festival called him “one of the supreme masters of cinema,” but elsewhere, 20 years after his death, he deserves an introduction to a new generation of film lovers. This program features 10 McLaren classics including the Oscar-winning, surrealist political comedy Neighbors (1952); Begone Dull Care (1949), a pioneering example of hand-painted film (and perhaps the first abstract music video) and the colorful Hen Hop (1942), starring an ill-fated dancing chicken. Ravi Shankar provided the music for A Chairy Tale (1957), which relates the story of a piece of furniture reluctant to do its job. The Palme d’Or-winning Blinkity Blank (1955), with its hand-etched frames, takes the appearance of moving pictographs; and the wondrous Pas de Deux (1968) transmutes real dancers into abstract animated forms. McLaren ventured far afield in terms of form. He described his early films as an attempt to “preserve the same intimacy and closeness that exists between a painter and his canvas,” and his later experiments pioneered new technological methods of meshing picture and sound. What distinguishes McLaren’s films is the jubilant ways they celebrated motion, color and movement and their perfectly brevity. No fan of feature-length films (he classified them as either too long, much too long or very much too long), McLaren kept all of his animated works under eight minutes. His secret, as told to the New York Times,“Keep it simple, fast and tight. Nothing extraneous. The shorter the better.” Born in Scotland, Norman McLaren studied design at the Glasgow School of Art and, in 1941, was brought by documentary filmmaker John Grierson to Montreal,where he ultimately worked for the National Film Board of Canada for more than 40 years. McLaren directed 70 documentaries, educational films and short animations and won an Oscar and 10 Canadian Film Awards. McLaren died in 1987. In 1989, the headquarters of the NFB was rededicated in his name. (From the SDIFF schedule)