One of the scariest films of the year 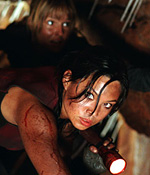 When this film premiered at the last Sundance Film Festival, the theater was packed and the audience was quickly caught up in a roller-coaster thrill ride that had them screaming like small children in the worlds scariest cave. English director Neil Marshall's previous film was an overlooked gem about werewolves (DOG SOLDIERS) and he knows how to deliver the goods. Although strongly influenced by DELIVERANCE, THE DESCENT is a straight-up horror film that never stops scaring the pants off its audience. It's the perfect way to set the mood for any Halloween weekend party afterwards.