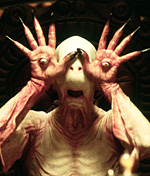 Award-winning filmmaker Guillermo del Toro delivers a unique, richly imagined epic with Pan’s Labyrinth, a gothic fairy tale set against the postwar repression of Franco’s Spain. Del Toro’s sixth and most ambitious film, it combines the historic and moral themes of his acclaimed Spanish Civil War ghost story The Devil’s Backbone with the protean visual creativity and gripping dynamics of Hellboy. The film unfolds through the eyes of Ofelia, a dreamy little girl who is uprooted to a rural military outpost commanded by her new stepfather. Powerless and lonely in a place of unfathomable cruelty, Ofelia lives out her own dark fable as she confronts monsters both otherworldly and human. For Ofelia, fables of good and evil, magic and danger are more than simple entertainment. They are her window onto the world, awakening her to life’s everyday possibilities and mysteries. When a dragonfly captures Ofelia’s attention during a roadside stop, it is not a gangly insect that she follows into the woods but a glistening emerald ambassador, welcoming her to its domain. In this new tense and fearful environment, Ofelia finds a sympathetic presence in the housekeeper Mercedes, who shows her a rambling, neglected old garden near the mill. With its winding paths, it is a lovely place to wander, though one can easily become lost there after nightfall. That garden labyrinth will become Ofelia’s haven, a dark refuge from loneliness and sorrow. It is a place of fantastical creatures and powerful talismans, presided over by the teasing, inscrutable Faun. Here, Ofelia will come to terms with the world as she knows it – and with the monsters that live not only in her imagination, but in her daily life.