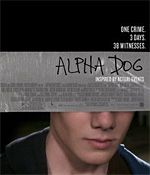 In the sprawling, privileged neighborhoods around L.A., bored teenagers with too much time and too much money string one hazy day into another, looking for the next thrill—doing suburban imitations of the thug life they idolize from rap music, video games and movies. When you’re living without any consequences, anything can happen. And in the hot California summer six years ago, something did. Inspired by true events, Alpha Dog follows three fateful days when the lives of a group of Southern California teens suddenly dead-ended.