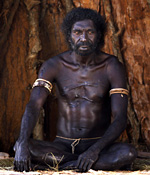 It is rare that film can transport its audience to a strange, unfamiliar, yet entrancing world. Ten Canoes, an Australian movie that tells an ancient Yolngu tale, presents such an extraordinary experience. With an all Yolngu cast, and based on Yolngu myths and stories, as well as a irreplaceable series of old photographs, Ten Canoes recreates the traditional life of the tribe, its stories and its teachings. And it does all this while entertaining and educating the audience.

The Yolngu, an Australian Indigenous tribe from Australia's Northern Territory near Darwin, have a long tradition of mythological storytelling as a means of teaching each generation the tenets and laws of the tribe. Through its narrator, the film introduces such a myth, but it does so through the device of an inner story that is a thousand years old. The narrator, David Gulpilil (The Last Wave, Crocodile Dundee, Rabbit Proof Fence,) sets the stage at the beginning of the film.

The ancient myth, which is the heart of the movie, is beautifully filmed on location in color. It is a cautionary tale about the evil that can befall men when they let their passion and anger rule, rather then "they live proper way."

Ten Canoes is an appealing film with universal themes that presents a unique glimpse at a world that would be lost but for the efforts of filmmaker Rolf De Heer and the exceptional Yolngu actors...for whom this movie is clearly a labor of love. (E.S. Mendel, CultureVulture.net)