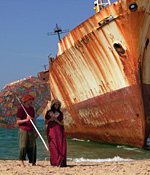 The word bled in "Bled Number One," the title of Rabah Ameur-Zaimeche's follow-up to his well-regarded debut "Wesh-Wesh" (What's Going On?) in 2001, translates roughly as Hicksville. Which is precisely where Kamel ends up after being deported from France to Algeria, the land of his fathers, after doing time for robbery.

Bled is a finely observed slice of life shot in a low-key semi-documentary style. The latest in a run of French-made movies dealing with Franco-Algerian cross-currents, it speaks volumes about the conditions of life in today's Algeria and should play well in festivals and in the Arabic-speaking world.

Ameur-Zaimeche, as Kamel, plays the male lead as he did in "Wesh" whose protagonist also is a young Franco-Algerian recently released from prison. But where the earlier film deals with inner-city issues in France, Bled takes a cold-eyed look at life on the other side of the water.

Ameur-Zaimeche's direction is unfussy, favoring a quietly reflective mood with slow fades and several long takes of exteriors in dying light. He is never judgmental, but it's clear where his sympathies lie: In the conflict between tradition and modernity, at least in this corner of the Arab-Islamic world, the latter has a lot of catching up to do. The situation of women who have acquired Western tastes -- like a girl who, in the hospital where she has been taken after an abortive suicide attempt, sweetly sings the Billie Holiday classic "Don't Explain" -- is particularly delicate. (B. Besserglik, Hollywood Reporter)