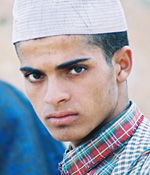 War story "The Betrayal" takes a timely look back to the 1960 Algerian war of independence. Multivalent title refers to divided loyalties that threaten to tear apart a French army unit made up of mutually suspicious European colonizers and Algerian Arabs. Smart script co-written by Moroccan-born French helmer Philippe Faucon ("Samia") pulls off the difficult task of doing justice to opposing positions while withholding enough information to maintain suspense.

Patrolling a dusty rural region of Algeria, a squadron of the French army is led by Lieutenant Roque (Vincent Martinez), a decent officer and good leader worn out by homesickness and the long-running conflict with the FLN (the Algerian rebels fighting for independence). Nominally, everyone in Roque's unit is French, including the men of European extraction born in North Africa and those of Arabic origin who've been promised the same rights as French citizens should the rebellion be quelled.

In practice, however, the four Arabs in the unit, led by Taieb (Ahmed Berrhama), who act as liaisons between the army and the hostile locals, are doubtful President De Gaulle's government will honor its promises. They are treated with racism within the unit, and suspicion by their European colleagues. The locals accuse them of being traitors to their country.

The army destroys a village suspected of collaborating with the FLN and moves the residents to a refugee camp. Torture of Algerian suspects is an everyday occurrence at headquarters. A less ambitious film might have stuck to watching events unfold from Roque's point of view alone, but here plenty of scenes show the Algerian soldiers talking among themselves, their dialogue in Arabic never quite proving or disproving the accusations against them. Pic cleverly plays with language to draw out suspense, not just to create mystery for its own sake but to allow the full complexity of the issues to sink in. (L. Felperin, Variety)