Sound of the Soul

An interfaith celebration of song 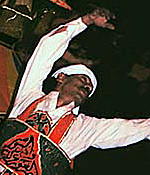 There's a moment in "Sound of the Soul" when you stop looking at the subtitles. You don't need them when the Frasa Group from Morocco works itself into a frenzy of spiritual chanting, shifting forcibly from one note to the next in near unison. No matter your religion or lack thereof, it's no longer about the words or deities or beliefs, but rather the transcendent power of music.

In Stephen Olsson's 2005 documentary, the Moroccan city of Fez hosts an annual summer gathering called the Fez Festival of World Sacred Music. For eight days and nights, a vast lineup of musicians from all over the globe play to a rapt crowd, dotted with scientists, artists, religious leaders, and entrepreneurs.

Fez, we learn, is an ideal spot for such a mash of cultures and religions, given its founding in the ninth century by Sufis who made devotional singing a cornerstone of their spiritual practice. And the city is renowned for its tolerance of different faiths: "In a world still bleeding from religious misunderstanding, hatred, and violence, the Fez Festival takes place in an Arab country where Jews, Christians, and Muslims have lived together in relative peace for centuries," the narrator intones.

Olsson wisely trains his cameras on the musicians in action, often giving them three or four uninterrupted minutes to play. Many of them hail from Morocco and other parts of Africa, Europe, and the Middle East. There's diversity within that array (from Anuna's celestial Irish choral singing to mournful fado from Portuguese singer Katia Guerreiro), but notably absent are groups from Asia and Latin America. Only one combo, the McCollough Sons of Thunder, a brass band from New York City, represents the United States.

The film works best in the musicians' own words about why music truly is the universal language of mankind, as Henry Longfellow once wrote. Mauritanian singer Dimi Mint Abba says, "What I think about really depends on the song I am singing. I have conversations with God."

Or Mohammed. Or Allah. Or Buddha. It's practically all the same to these musicians, and that's why their songs never get lost in translation. (J. Reed, Boston Globe)

Sound of the Soul