No End in Sight

Essential viewing for any patriot 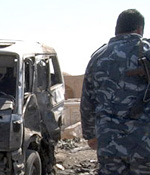 So far, some of the best documentaries about the war in Iraq — “Gunner Palace,” “The War Tapes” and “Iraq in Fragments,” for example — have concentrated less on politics, policy or military strategy than on individual, in-the-moment experiences. As if to balance a climate of argument thick with generalization and position-taking, these films push debate aside in order to bring home the sensory details of daily life for American soldiers and Iraqi civilians.

“No End in Sight,” Charles Ferguson’s exacting, enraging new film, may signal a shift in emphasis, a move away from the immediacy of cinéma vérité toward overt political argument and historical analysis. Not that these have been scarce over the past few years, as an ever- growing shelf of books can testify. Among Mr. Ferguson’s interview subjects are the authors of some of those books — notably Nir Rosen (“In the Belly of the Green Bird”), James Fallows (“Blind Into Baghdad”) and George Packer (“The Assassins’ Gate”) — and his film in effect offers a summary of some of their conclusions.

The film’s title evokes the apparent interminability of this war more than four years after President Bush declared that “major combat operations” were over, and it twice shows Mr. Rumsfeld telling journalists, “I don’t do quagmires.” But Mr. Ferguson’s focus turns out to be fairly narrow. He does not dwell on the period between Sept. 11, 2001, and the beginning of the invasion that overthrew Saddam Hussein, nor does he spend a lot of time chronicling the violence that has so far taken the lives of more than 3,000 American soldiers and marines and tens, perhaps hundreds, of thousands of Iraqis. Instead, most of the movie deals with a period of a few months in the spring and summer of 2003, when a series of decisions were made that did much to determine the terrible course of subsequent events.

It might be argued that since Mr. Bremer, Mr. Rumsfeld and Mr. Wolfowitz declined to appear in the film, Mr. Ferguson was able to present only one side of the story. But the accumulated professional standing of the people he did interview, and their calm, detailed insistence on the facts, makes such an objection implausible. So too does the corroboration of the journalists who watched the story unfold and, perhaps most of all, the sense that anyone but the hardiest Bush loyalist will feel of having seen versions of this story before.

That feeling does not make “No End in Sight” dull or easy to watch. Quite the contrary.

No End in Sight