Humanity at its most base 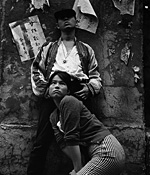 Irreverent and unabashedly human, Shohei Imamura's Pigs and Battleships begins with drumrolls that would introduce a rousing rendition of The Star Spangled Banner. However, the rendition is never completed and instead mutates into something entirely different; like a tune rendered as an insult rather than as an anthem. The beautiful day-time vista of a coastal town occupied by American forces with the American flag calmly moving against the sea breeze is transformed into the night-time red-light district of that town --- pimps scrambling for horny Yankee servicemen; whores lined up advertising their bare wares; neon-lights adorning these building that house all sorts of men and women.

Clever Kinta (Hiroyuki Nagato) steals one of the servicemen's caps, luring him to a place where whores are selling their bodies without a sideglance on privacy, decency and honor. Sex is haggled, and performed side by side, in double-decker beds, within thin walls that separate a fully-manned kitchen with the dirty bedroom. Kinta escapes the arresting officers, meets up with his girlfriend Haruko (Jitsuko Yoshimura), and talks about a plan to make money by feeding hogs. It seems that the hog industry has become very lucrative, inviting the remnants of an underground gang and Chinese businessmen to fight over the business. In the midst of the shady dealings and several backstabbings, Kinta and Haruko try to rise above the meager future that the American occupation may provide them.

Imamura's film is a biting satire and genuinely affecting. Although the American occupation is barely seen but distinctly felt; it mostly appears as drunken servicemen roaming the red light districts, or visions of lined-up battleships dotting the ports, or the seedy hands of capitalism inching towards the disappearance of culture and norms. Imamura does not hold back in his savage portrayal of the occupation --- its effects are overtly humiliating with Japanese men becoming subservient to the whims, caprices and lusts of these Yankee soldiers, and women being sold as wives for what seems to be a desperate need to rise above the porttown poverty the war has afflicted the citizenry.

However, Imamura doesn't stop there. He also casts Japanese society in a bad light. He puts the spotlight to the honor-less desperation the defeat has brought upon Japan. It is a town wherein mothers and sisters wouldn't be bothered in prostituting their relatives to men they barely know or understand. It is a town wherein the narrow paths to a wealthy future force the men to cheat, swindle, and parasitically rely on other people's weaknesses and poverty. It is a society that can be likened to a pig pen; the citizens forcedly filling the spaces and whatever path opens is rushed upon with lethal abandon, not caring whether a living creature is mangled and stepped upon along the way. In Imamura's eyes, the world has been reduced into a world of pigs and battleships.(Oggs' Movie Thoughts)