Raiders of the Lost Ark: Adaptation 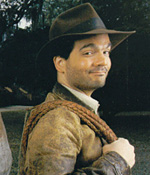 At certain points while he was watching Eric Zala's six-years-in-the-making shot-for-shot remake of his classic 1981 adventure, I'm sure Steven Spielberg breathed a sigh of relief that no kids got killed trying to reproduce the hairier sequences of his film. By now, 'Raiders of the Lost Ark: The Adaptation' has become legendary, a film far more talked and read about than actually seen (it can only be shown at rare screenings).

For those who don't know the backstory: In 1982, a trio of Mississippi kids ranging in age from 11 to 13 — Eric Zala, Chris Strompolos, and Jayson Lamb — decided to remake Raiders from start to finish. Six years later, after much turmoil and behind-the-scenes drama, the film was completed, shown to an appreciative local audience, and then disappeared, shown only occasionally when one of the since-grown kids felt like breaking out the video to show to friends. Somehow, Eli Roth got ahold of a copy, flipped over it, pressed it into the hands of Harry Knowles, and encouraged him to show it at one of the Alamo Drafthouse's Butt-Numb-A-Thons. Knowles did, the audience went insane, and a legend was born — or reborn. There's now talk of Dan Clowes working on a movie based on the kids' experiences.

Spielberg's Raiders is my favorite film of all time, and I would be the first to lead a torch-bearing mob to the gates of Paramount if the studio announced an actual remake. But this remake, started by prepubescents and finished by battle-hardened veterans of DIY filmmaking, is consistently charming and even exciting on about the same level as the original. When I was a kid and saw Raiders for the first time, I laughed with happy glee at the whole desert truck chase sequence. When I watched the same sequence being done by teenagers — with no stuntman, no trench dug beneath the truck for safety, no nothin' — I laughed with even happier glee: The crazy young bastards did it. Unlike a studio-mandated remake, this was done for love, not money, and the love — not only for Raiders but for filmmaking itself — glows in every shot.

This isn't a "cute" Bugsy Malone thing, with kids playing dress-up and expecting us to be impressed by the novelty of it all. For about five minutes it does play that way, but as you get into what they're doing and how many details they rigorously duplicate, the movie gets you more and more involved on different levels. As has been said elsewhere, you keep looking forward to the next death-defying scene and wondering how the hell they're going to pull it off. And every damn time, they either pull it off or come up with an equally ingenious workaround, like substituting a motorboat for a plane at the end of the opening Peru sequence. (Why not? It gets Indy out of there just as efficiently.)

The actors — Strompolos as Indiana Jones, Angela Rodriguez as Marion, Zala as Belloq — famously get visibly older (or younger) depending on the scene. But that just gives us a deeper appreciation for the commitment required in this act of devotion. Zala in particular nails Belloq, suavely re-enacting Paul Freeman's slimy but conflicted archaeologist. It's obvious Zala and editor/cinematographer Jayson Lamb spent countless hours getting the Spielberg technique right — the smash-cut from the Ark's lid thudding to the ground to Marion falling off her chair; the backlit medallion in the Map Room; the shot of a mournful Indy looking out the door at the Imam's place (a shot that always got to me in the original).

Commitment — there's that word again. Most kids would just want to film "the good parts," but Zala and company stuck to the script, including all the exposition. If, for instance, they'd left out the conference between Indy and Marcus and the government guys ("Any of you guys go to Sunday school?"), I still would've enjoyed the film, but not quite as much. But they run through the whole scene, obviously as committed to getting it right as they are to staging the fiery shoot-out in Marion's Nepalese tavern. (This was the first sequence where I imagined Spielberg being grateful that he didn't read about it in 1983 as an AP item: KIDS DIE IN FIRE TRYING TO REMAKE INDIANA JONES FILM.)

Very often, the homemade solutions to duplicating a multimillion-dollar studio film match the ingenuity Spielberg showed in the original. In the shot from Indy's POV, looking up from the Well of Souls to Belloq and his Nazi posse sitting smugly up top and looking down on him, the sky must not have been the shade of bright blue that Zala wanted, so there's a blue tarp behind Belloq and company.

Yes, Jock's airplane becomes Jock's motorboat and the Nazi monkey becomes a Nazi puppy (Snickers, to whose memory the film is dedicated). Otherwise, though, the fidelity to detail is astonishing:

The sadistic Toht (Ted Ross) is seen on the airplane reading the same issue of Life magazine that Ronald Lacey hid behind in the original. Chris Strompolos inflects such lines as "It's a date. Ya eat 'em" and "Ha ha ha ha — son of a bitch" with such precise Harrison Ford mannerisms it goes past mimicry into channeling Ford. The swinging-mirror gag is there (right down to the cutaway to an exterior shot of the ship as Indy howls); the coathanger gag is there; when Belloq and the drunken Indy sit in a bar, a gun is seen changing hands in the foreground, just as in the original. These touches add up, and there are times when you forget you're watching a skillful teenage re-enactment and start seeing it simply as Raiders of the Lost Ark, with different faces, and seen through fresh eyes. (B. Dorf, eFilmCritic.com)

Below are some links sent by the guys:

We also just had sold-out shows in Manhattan, at the Anthology Film Archive, as noted in this website: Indie Wire

BBC video showing crowds from our sold-out Brooklyn screening in 2005:

An amazing review that just came out on FilmJerk.com

Raiders of the Lost Ark: Adaptation