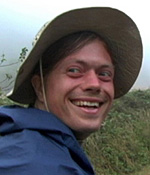 Seattle filmmaker Linas Phillips replicates Werner Herzog's pilgrimage -- in 1974, the iconic German cult director walked from Munich to Paris to see a dying friend -- to life-changing effect. Phillips treks from Seattle to Herzog's home in L.A., hoping to meet his idol, as well as find his own soul (and make a movie). It's a "Fitzcarraldo" moment as Phillips channels Herzog's usual protagonist-madman, Klaus Kinski, with unexpected, profoundly affecting results.

The characters who cross his journey's path are profiles in affliction, sadness and grace. Some are true eccentrics, others have suffered tragedies beyond the imagination and they stand as a spiritual reminder that edges past the unendurable to enlightenment. It's the closest thing to a cinematic religious experience I can think of -- all combined with Phillips' terrific sense of visual style, humor and willingness to risk life for art. (P. Nechak, Seattle Post-Intelligencer)

Film Studies alumnus Alan Caudillo, who did some work on this film (as well as the latest Henry Jaglom film) will introduce and do Q&A.