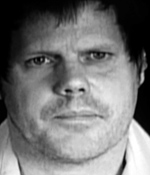 Mark Brecke comes from San Francisco’s underground film scene and functions under the radar. He got started making super-eight art films that he screened behind punk bands. He’s unaffiliated with any media outlet. His work documents the stories of people victimized by war, ethnic conflict, and genocide, covering over ten years and three continents in some of the most troubled regions of the world including Cambodia, Rwanda, Kosovo, Sudan, West Bank, and Iraq.

He studied Cinema with Phil Green (apprentice of Ansel Adams and assistant to Dorothea Lange), and continued his studies at University of California, Berkeley with the found footage experimental filmmaker Craig Baldwin. He lives in a small loft, uses a second-hand computer, doesn’t have any credit cards and travels the city mostly by bicycle. He sells photographs to help finance his trips, but he doesn’t call himself a freelancer, because that suggests he gets paid for his pictures. In most cases Mark created his own fake press passes to get into war zones and Senate chambers. He used to carry Xeroxes of American $20 bills to bribe drunken border guards. He’s very gifted on a Kinko’s copy machine. All proceeds to benefit Doctors Without Borders.

Pre Screening of They Turned Our Desert Into Fire (2007, 90 min) is a documentary that Mark made while traveling across country by train on his way to Washington DC where he arranged a presentation of his work in Darfur. He showed his pictures to fellow passengers and explained very simply to them what was happening when the photos were taken. Their emotional responses were captured on video and audio-taped for National Public Radio. When he got to DC he handed out handmade flyers to get people to his presentation. As a result his photos were hung in the Senate rotunda on Capital Hill.