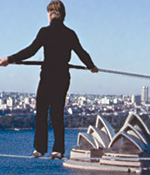 In 1974, Philippe Petit pulled off an extraordinary prank when he walked across a wire suspended between the Twin Towers of the World Trade Center. What people didn't realize was how much planning such an undertaking required. Here James Marsh documents the amazing achievement of Petit and his motley crew of supporters.

A man walks on a high-wire across the Twin Towers -- and how he does it -- is the grab-you-by-the-lapels premise from which James Marsh's "Man on Wire" erupts onscreen as one of the most wildly entertaining docs of recent years. This docu of daredevil Philippe Petit, who brought together a motley crew to help him realize his dream of crossing from the top of one tower to the other in 1974, is an adventure tale that astonishes in every respect. A double prize-winner at Sundance (jury and audience awards), the pic figures to balance considerable biz in theatrical and vid arenas.

Marsh has thankfully stepped back from his disappointing first narrative film, "The King," and returned to his real metier: non-fiction ("Troubleman," "Wisconsin Death Trip"). Cleverly, he inserts some re-staged material from the beginning moments that feel like the windup to a heist movie, but unlike many docs including freshly staged action, the line between new and archive is fairly invisible.

The "heist" is actually Petit's team tensely prepping to stealthily enter the World Trade Center on Aug. 7, 1974, with doubts held by the crew's French members about some of the seemingly shady Yanks in their circle. Pic is structured in a movie-within-a-movie fashion, with the action of that day hurtling forward in segments, as Petit's background and previous high-wire stunts is told chronologically.

A child who refused to acknowledge physical limits, Petit loved the wire from an early age, and the superb and ample archive footage and photos of his walks across the towers of Notre Dame and the Sydney Bridge towers suggest a dizzying combination of athleticism, poetry, public performance and showbiz that can only be compared with the wild motorcycle stunts of Evel Knievel. Like Knievel, Petit is his own best publicist and raconteur, spinning out thoughts (in his deliciously accented English) with such joie de vivre that had Marsh conceived his film as a single talking-head shot of Petit alone, that would have been enough.

Impressive from an archival standpoint is the electrifying yet pastoral color footage of Petit training for the Twin Tower walk with g.f./partner Annie Allix (who put aside her own dreams to support Petit's), longtime friend Jean-Louis Blondeau and Jean-Francois Heckel. Planning was profoundly important, shown in images of Petit's models of the tower roofs and rehearsals to re-create the effect of high winds whipping the wire.

The group of unlikely characters who assisted in Gotham (including musician and then-pothead David (aka Donald) Foreman), plus the semi-comic suspense and absurd accidents that happened in the Twin Towers -- whose erection is lovingly viewed here without a second's mention of 9/11-- are elements worthy of a Billy Wilder movie. The fact that Petit and his team were able to get their load of equipment and tools to the top floor simply by asking to be taken there by the freight elevator operator is just one sign that the gods must have been in their corner.

Marsh brilliantly matches his images to the hypnotic and propulsive music of English minimalist composer Michael Nyman, including pieces from Nyman's masterpiece, "La traversee de Paris," and his collaborations with Peter Greenaway. It's a sublime choice that lifts "Man on Wire" to rare movie-watching giddiness.

Though funders Discovery Films and BBC no doubt have TV designs for the film, "Man on Wire" is bigscreen in every way.