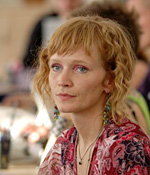 Recent flooding in Prague provides the backdrop to this moving drama about a woman torn between her loyalty to her children and her desire for connection. BEAUTY IN TROUBLE is the most recent collaboration of director Jan Hrebejk and writer Petr Jarchovsky (UP AND DOWN).

Recent history once again intrudes on the present-day lives of working Czechs in masterful multicharacter drama "Beauty in Trouble." Latest work from fruitful, long-time partnership of director Jan Hrebejk and scripter Petr Jarchovsky deepens and expands over-arching ideas of fate, love and redemption found in their previous film, equally resonant "Up and Down." Duo's work is a staple of the high-profile fest circuit, and will, following early September domestic bow, be in great demand in territories where moving, human dramas are valued.

Title comes from the Robert Graves poem, itself adapted into a Czech popular song in the 1980s and performed in the film by homegrown thrush Raduza. Germ of pic's idea was first line, "Beauty in trouble flees to the good angel/On whom she can rely…"

This is manifested here in the form of beautiful young mother Marcela ("Zelary" star Ana Geislerova), who lost everything during the 2002 floods that swept through Prague. She's currently living in a spartan flat attached to the chop shop run by her husband Jarda (Roman Luknar), a surly but fundamentally good man forced into crime to make ends meet. Just about all they've got left is spectacular sex, which routinely forces their children, Lucina (Michaela Mrvikova) and asthmatic Kuba (Adam Misik) to cover their ears.

When one of Jarda's workers steals a luxury station wagon belonging to well-to-do émigré Czech vintner Evzen Benes (Josef Abrham), in town from Italy to negotiate the restitution of his childhood home, Jarda is thrown into prison. This forces Marcela and her children into the cramped flat of her timid mother, Zdena (Jana Brejchova) and her domineering husband, skeletal diabetic Richard Hrstka (Jiri Schmitzer).

While enduring with Richard's manipulative resentment at her presence, Marcela must also fend off the clingy advances of her mother-in-law Liba (Emilia Vasaryova), a teacher under socialism who is now born-again in the small church of her preacher brother, Havlik (Jan Hrusinsky).

Having met briefly at the police station, Benes and Marcela begin a hesitant, low-key courtship. Thus does the first good angel, Zdena, give way to the second, Benes: in time, he takes mother and children to his Tuscany vineyard. Thus does he reconnect with his Czech heritage, while Marcela sacrifices family for stability. Fate, however, has other ideas.

Story's twists and turns are both logical and plausible, all the while maintaining a narrative elegance and clarity. D.P. Jan Malir's widescreen frame is packed with rich character detail, from the Italian translation of Kundera Benes reads at the police station to the wine-and-soda concoction, dubbed a "Toadstool," favored by the uncultured yet complex Marcela.

Perfs are strong and focused across the board. Geislerova expands on the new maternal ferocity first exhibited in Bohdan Slama's "Something Like Happiness," while Luknar makes a welcome return to Czech film after starring in the 1995 Slovak fest fave "The Garden." Vets Vasaryova, Brejchova and Abrham bring gravity to proceedings, while Mrvikova and Misik are poised as moppets trying to make sense of adult foibles.

In a company of skilled thesps, Schmitzer brings the bitter Hrstka to monstrous life as a lacerating Greek Chorus of unwanted truths and psychological gamesmanship. Only when auds are convinced he's a total bastard does he almost off-handedly deliver one of pic's strongest thoughts, a line about Marcela's move to Italy that will resonate with all Czechs: "we're washed up, but they have a chance."