1961 Social Satire Launched Its Own Genre 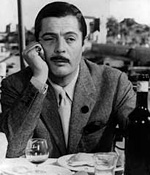 Pietro Germi's farce features a married Sicilian baron (Marcello Mastroianni) who falls madly in love with his 16-year-old cousin. With divorce illegal in Italy, the Baron must plot a crime of passion to get the Baroness out of his way, in the first film of what would become an entire genre, Commedia all'italiana.

Marcello Mastroianni, the Italian actor who had the leading role in "La Dolce Vita" and what seems like at least half the important Italian films of recent years, surpasses himself as a comedian in "Divorce—Italian Style," a dandy satiric farce that opened at the Paris yesterday. And Pietro Germi, who directed and helped write the script, announces himself with this achievement as a master of farce in any style.

For here, in this nifty frolic about a bored Sicilian baron who plots to force his wife to compromise herself with another man so he can honorably shoot her and then marry a 16-year-old girl, the director and star have accomplished that very difficult and delicate thing of making murder seem an admirable ambition and the would-be murderer seem a sympathetic gent, all without violating reason or causing really serious moral offense.

To be sure, the assumption is outrageous— at least, to a non-Latin it is—that the "code of honor" might be craftily manipulated in order to "divorce" one's spouse. And the fact that the total population of a Sicilian city might be cunningly engineered into demanding and compelling the act of honor might seem beautifully and blissfully naïve.

But Mr. Germi has managed to establish his thesis so well, with a wonderfully droll illumination of the slippery characters of the community, and he has worked out his plot so deftly, with his tongue obviously in his cheek, that the whole arrangement seems not only respectable but also devilishly ingenious.

Indeed, ingenuity is the striking directorial quality one notes in the charmingly smooth, efficient and flexible flow of the film. Mr. Germi is a genius with the sly twist. With the deft fluidity of the dissolves, he wittily mingles the images of his hero's murderous fantasies with the humdrum actuality of his torpid and henpecked home.

And he gets out of Mr. Mastroianni a performance that hangs in one's mind as one of the most ingenious and distinctive comic characterizations that has lately been.

Not since Charlie Chaplin's beguiling Verdoux have we seen a deliberate wife killer so elegant and suave, so condescending in his boredom, so thoroughly and pathetically enmeshed in the suffocating toils of a woman as Mr. Mastroianni is here. His eyelids droop with a haughtiness and ennui that are only dispelled when he looks with a gaze of lecherous longing at his teenage cousin, whom Stefania Sandrelli plays.

With his wife, played by Daniela Rocca, he is weary, disgusted and sad—until he is hit by the inspiration to arrange an Italian "divorce."

Then his crafty maneuverings to discover and place the right man in what might be accepted as a shameful situation with his wife; his tricky arrangements of tape recorders and his lining up the proper lawyer in advance—these all are deliciously ingenious and grandly diabolic and droll.

Even to begin to hint at what happens and how nicely and ironically it ends would be to endanger your enjoyment, but be sure the humor holds to the end.

Mr. Mastroianni's performance is thoroughly complemented by the humorous uxorial enthusiasm that Miss Rocca provides. Miss Sandrelli is fetching as the girl who captivates, and Leopoldo Trieste is uproarious as the diffident and respectful "other man." Colorful and funny characterizations of Sicilian locals are turned in by Odoardo Spadaro, as the hero's father; Pietro Tordi, the sliver-tongued lawyer, Bianca Castagnetta, the hero's mother, and several more.

The background music, very Sicilian and romantic, is wittily and wistfully used, and the English subtitles of Rick Carrier catch and humor of the lively dialogue.

This is one of the funniest pictures the Italians have sent along.