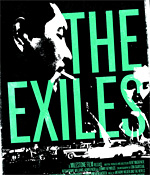 In 1957, with the help of friends and family members, Kent MacKenzie was gathering film remnants from cutting room floors and making his first documentary feature, The Exiles, about a long night of carousing among a group of Native Americans who had left their reservations and come to live in Los Angeles. MacKenzie, who had just graduated from film school at USC, which he attended on the GI Bill, focused his lens on the overlooked, then-decrepit Bunker Hill area of Los Angeles (a prominent neighborhood in the noir writings of Raymond Chandler, Nathanael West, and the recently rediscovered John Fante). Director MacKenzie and his crew befriended the community and had them reenact key scenes of their own histories in the staged-documentary tradition of Robert J. Flaherty (Nanook of the North). This film, celebrated at the 1961 Venice Film Festival for its lush images lovingly depicting an impoverished yet vibrant people, fell into obscurity when it failed to get commercial distribution. Manohla Dargis of the New York Times called it “nothing less than a welcome act of defiant remembrance” when The Exiles was restored and released this summer by Milestone Film. With music by The Revels (Pulp Fiction soundtrack).

Kent MacKenzie's 1961 film The Exiles has been hailed as a landmark in American independent cinema, and called one of the most honest portrayals of contemporary Native American life ever filmed. Both those claims are verifiable. Compared to the slick approach that Hollywood took even to the "social problem" films of the era, The Exiles is bracing and raw, more akin to the French New Wave and British kitchen-sink dramas. And compared to the Westerns and comedies of the time, The Exiles is infinitely more complex in its characterizations of Indians who struggle with poverty and loneliness in Los Angeles. But it would oversell this movie to say it's still as fresh as it must have seemed in its day. The cinematic landscape has since witnessed more than four decades of spare, virtually plotless foreign and indie films about people hanging out, and if anything, The Exiles feels a little protozoan.

Better then to admire The Exiles for its specific docu-realist elements, which preserve places and moments that viewers won't find in any other film. MacKenzie shot most of the movie in L.A.'s Bunker Hill neighborhood (serviced by the inclined trolley known as "Angels Flight"), and in and around the cramped apartment shared by Homer Nish, his pregnant common-law wife Yvonne Williams, their Mexican acquaintance Tommy Reynolds, and a handful of others. The Exiles accentuates the fuzzy neon of bars and liquor stores, and moves to the rumble of the garage-rock band The Revels. While Nish, Williams, and Reynolds roam from markets to parties, they take turns narrating, describing their boredom with the routine, and how much they miss the open spaces and sedate pace of the reservation.

MacKenzie doesn't try to pretend that his subjects are saints. The men manhandle their women, get into fights, and seem to go out of their way to avoid paying a check. But MacKenzie poeticizes their lapses, and lets all the wandering and carousing culminate in a haunting climactic scene, in which dozens of Native Americans gather on Hill X after the bars close, to beat drums and drink until they fall into an ecstatic stupor.

Note that this screening is on a football game day, so we encourage you to bike, bus, or walk to Muenzinger.