The Second Chechnyan War Through A Grandma's Eyes 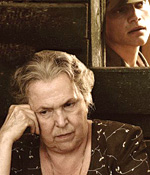 Alexander Sokurov directs a drama in which an elderly woman (played by the soprano Galina Vishnevskaya, an exiled Soviet dissident) takes a train trip to visit her grandson at his army camp in Chechnya.

Alexander Sokurov’s “Alexandra” — a film of startling originality and beauty — feels like a communiqué from another time, another place, anywhere but here. Mr. Sokurov, a Russian director best known in America for “Russian Ark” (2002), makes films so far removed from the usual commercial blather that it sometimes seems as if he’s working in a different medium. His work is serious, intense, at times opaque and so feverishly personal that it also feels as if you’re being invited into his head, not just another reality.

The head that Mr. Sokurov invites you into here ostensibly belongs to his title character, an elderly woman visiting her grandson at the Chechen front. The name Alexandra scarcely seems coincidental, and neither does the unusual casting. Alexandra is played by the soprano Galina Vishnevskaya, the widow of the cellist and conductor Mstislav Rostropovich, about whom Mr. Sokurov recently made a documentary. In 1978 the Soviet government stripped the dissident couple (Aleksandr Solzhenitsyn lived at their dacha) of their citizenship. Mr. Rostropovich gave an impromptu cello concert next to the Berlin Wall after it fell and, with his wife, returned home after the collapse of the Soviet Union. When Ms. Vishnevskaya, now 81, enters this film she carries with her the weight of history.

She looks as if she can handle it. Invested with unmistakable hauteur — her intense, flashing eyes lock on their targets like tracking beams — Ms. Vishnevskaya reminds me of nothing so much as one of those well-seasoned, time-toughened divas for whom the word no is never an option, even in the middle of a war zone.

When the film opens, Alexandra has just come from her home elsewhere in Russia, an elliptically rendered trip that ends with her literally waddling into the Chechen front towing a small wheeled shopping cart. She’s a dumpling of a woman, and with her cart and head scarf she looks as if she’s going marketing, but she’s actually visiting her grandson, Denis (Vasily Shevtsov), an unmarried 27-year-old captain who’s been at war too long.

Much of “Alexandra” unfolds at the military base where Denis is stationed, a ramshackle warren of wooden barracks and walkways often clouded with swirling dust. The purpose of her visit remains vague. Recently widowed, she misses Denis, but she’s also curious about his life and the war. Over the next few days and nights, she roams about the base, talking with Denis and the other soldiers, climbing in and out of military vehicles while emitting a stream of murmurs, mutters and oy, oy, oy. At one point she ventures off base, where she meets a Chechen woman, Malika (Raisa Gichaeva), who says the Russian soldiers always look so small to her. And, she adds with a rueful smile, there are so many of them.

Ms. Vishnevskaya is a small woman, at least vertically, or maybe she just looks tiny next to all those soldiers. Yet she’s also monumental, a formidable, almost epic presence even when she’s wearily sinking onto a bench or shrinking down to a speck against the vast, dusty landscape. But Alexandra is never lost, even in this strange land that she barrels into with such confidence — poise that at times borders on swagger. “Alexandra” has been called an antiwar film by some, but I’m not so sure that it is, even if it’s by no means pro-war. The tenderness with which Mr. Sokurov films these young soldiers with their downy necks and diffident smiles — they look at Alexandra with crushing yearning — seems proof enough of that.

Mr. Sokurov has said that “Alexandra” is about the eternal life of Russia, a sentiment that might sound mawkish or obscene coming from another filmmaker. But “Alexandra” strikes me as an enormously honest work, not just because there is palpable truth in its very location (it was shot in Chechnya, including in and around the capital, Grozny) but also because of the contradictions it lays open like a wound. There’s a stunning moment early in the film when Denis invites his grandmother into an armored vehicle. Squeezed into this metal tomblike space, she sniffs the air and remarks on the bad smell. It’s the odor of men and metal, says Denis, who then passes her a Kalashnikov. She grips the rifle easily, her eyes narrowing.

The terror in this moment is unmistakable, and then, in an instant, it’s gone. Much like the film itself, which offers lovely images amid horrifying devastation, the character of Alexandra contains multitudes that invest the film with a peculiar tension. With his roving camera, Mr. Sokurov follows Alexandra around faithfully, but he also makes time and space for the world she inhabits, a world partly made by war: ruined buildings with their fronts torn away, rows upon rows of military boots and uniforms (almost all that’s for sale at the market), the haunted, haunting eyes of unsmiling young Chechen men. Mr. Sokurov’s images speak so eloquently he doesn’t need many words.

I’ve seen “Alexandra” twice, and there are things in this remarkable film — bits of dialogue, one or two references and certainly the great heaviness of Russian identity — that remain out of my grasp. This may seem like a surprising confession, but art, including that created in Hollywood, rarely if ever reveals itself instantaneously. That may sound self-evident, though given the diminished appetite in America for serious films it bears repeating. “Alexandra” isn’t a difficult film, but neither is it obvious. It’s a beautiful, eerie work of art about life and death and the love a grandson expresses when he plaits his grandmother’s hair. It has revealed some of its mysteries, and I’m sure it will reveal more when I return to it again.