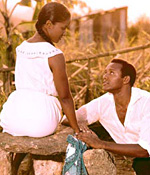 Bossa-Nova music became known worldwide upon French director Marcel Camus' recasting of the Greek myth of Orpheus and Eurydice as a Brazilian drama, which took the top prize at Cannes in 1959. Luiz Bonfá and Antonio Carlos Jobim's seductive music propels the story of an engaged Rio streetcar driver (Breno Mello) who falls in love with a visiting country girl (Marpessa Dawn) during the madness of Carnaval.

If pink, as Diana Vreeland famously pronounced, is the navy blue of India, then blue is the pink of Brazil in "Black Orpheus," Marcel Camus's 1959 classic.

A retelling of the Greek myth set during Carnaval in Rio de Janeiro, "Black Orpheus" came out a few years ago as a beautifully remastered DVD, courtesy of the Criterion Collection. But fans and newbies alike won't want to miss the chance to see a new 35mm print of the film on the big screen. A riotous, rapturous explosion of sound and color, "Black Orpheus" is less about Orpheus's doomed love for Eurydice than about Camus's love for cinema at its most gestural and kinetic.

Breno Mello plays Orfeo, a streetcar conductor in Rio who, on the eve of Carnaval, shuttles a beautiful country girl named Eurydice (Marpessa Dawn) to her cousin's ramshackle neighborhood overlooking Guanabara Bay. Although Orfeo is engaged to the fiery Mira (Lourdes de Oliveira), on the first night of Carnaval he discovers that it's the comely, pure Eurydice he really loves; as the increasingly frenetic festival continues, his passion for Eurydice grows, until their brief affair reaches a tragic crescendo. With the masked, often grotesque denizens of Carnaval providing a by turns demotic and demonic backdrop for Orfeo's descent into doomed love, the protagonist is offered one last chance to stay with Eurydice forever during a feverish candomble ritual.

"Black Orpheus" has become a classic not because of its intricate plot or standout performances, but because of how it looks and sounds. Teeming with movement and bursting with life, it's a study in rhythm and color. Accompanied by a mesmerizing, percussive score co-written by bossa nova legend Antonio Carlos Jobim, "Black Orpheus" weaves an intoxicating spell borne of dance, music and sensuality, even the action becomes fatally hellish and strange.