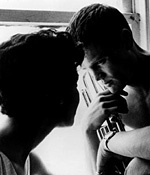 Trumpeter and vocalist Chet Baker was legendary for his performances with jazz greats Charlie Parker and Gerry Mulligan, and later for his self-destructive drug habit. Directed by fashion photographer Bruce Weber, with black-and-white cinematography by Jeff Preiss.

"Let's Get Lost," Bruce Weber's haunting documentary about legendary jazz musician Chet Baker, first came out in 1989 and hasn't been easy to catch since. Now reissued in 35 millimeter, the film looks like a pristine time-capsule -- both of Baker's midcentury heyday and his late '80s decline -- partly thanks to Jeff Preiss' luminous, black-and-white cinematography, which seems to eliminate the distance between the decades.

Told mostly through interviews with family members, wives, ex-wives and girlfriends, children and collaborators, people he inspired and people he betrayed, "Let's Get Lost" avoids the usual clichés of the biopic by resisting the urge to impose logic or extrapolate lessons from it. Baker may be a classic example of the "lost youth" or "beautiful loser" of his era, a man with remarkable gifts and little regard for them, and his story may follow a familiar arc of youthful success leading to excess and an early, steep decline (Baker leaves the usual trail of broken hearts and disappointed children), but it also provides unintended insight into the way charisma attracts a steadfast devotion that it doesn't necessarily warrant, deserve or ask for.

Weber is best known for his work as a fashion photographer throughout the 1980s and early 1990s -- he's the guy who brought erotic, nostalgic beefcake clad in Calvin Klein fig leaves into the mainstream (and, later, Abercrombie & Fitch), so it's no mystery why he was drawn to Baker as a subject. In the early 1950s, the impossibly handsome young Baker seemed to personify "cool" West Coast jazz. He had an all-American, movie star name and all-American, movie star looks, which eventually caved in on themselves after decades of hard living and heroin use. Both the look and the structure of the movie collapse time -- the liberal use of footage from obscure Italian B movies in which Baker starred and stills from early photo shoots create a lingering Dorian Gray effect. If there's a driving force to Weber's film, it seems to be delving into the nature and purpose of star quality and personal magnetism, which Baker had in droves but which didn't save him.

Weber and his crew followed Baker from West to East Coast, and then on to Europe, where Baker would die soon afterward after falling from an Amsterdam hotel room balcony. In early scenes, Baker is shot cruising around and hanging out on the beach in Santa Monica with young, '80s-style lounge lizards, sandwiched between young women in beat-poet drag -- the charismatic idol as decrepit old man, surrounded by young hipster throwbacks. As Weber explains in the production notes, however, the beach shoot was a reflection of how Baker felt about himself. He saw himself as eternally young, fixed in time.=

Photographer William Claxton talks about feeling like he "discovered" Baker after shooting his first photos of him, like he understood what charisma meant for the first time. Dick Bock, who founded Pacific Records, describes Baker's music as sounding like "the history of jazz." The images of a frail Baker (only 58) are a shocking contrast to the footage of him as a young James Dean lookalike, yet they are both such powerful and indelible alternate realities that it's hard to say which one wins out. Illusion and disillusionment entwine through the film like twin helixes, weaving a dreamy, free-form look at his life and legacy.