Echoes of Cult Classic in Tale of a Haunted Woman 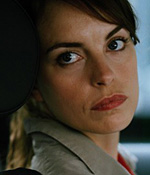 An unofficial remake of 1962's CARNIVAL OF SOULS, director Christian Petzold's YELLA is about a woman from eastern Germany who goes west when her marriage and career falter. Despite her skill at finding and creating new opportunities, Yella remains menaced by her past.

Anyone who has ever seen the 1962 cult classic Carnival of Souls (and if you haven’t, that creepy and atmospheric flick should be added to your annual Halloween viewing) will know early on in the German film Yella that something strange is happening. After landing a new job in Hanover, Yella (Nina Hoss, who resembles a softer, poutier Tina Fey) finds herself the survivor of a car crash off a bridge: an attempted murder-suicide at the hands of her estranged husband Ben (Hinnerk Schönemann). Undaunted, she continues on her way from Wittenberge—but nothing is working out quite how she hoped.

Her new employer has been banned from the office and makes a heavy-handed pass at her; Ben shows up at her hotel room, screaming about why she no longer loves him before trying to throw her into another body of water; and the hunky, not quite ethical businessman, Philipp (Devid Striesow), staying down the hall from her, arranges for her to accompany him to business meetings as a way to intimidate the men he’s meeting. Luckily for her, she proves herself more than adept at both causing a ruckus (helped by the blood-red blouse she constantly wears) and at interpreting spreadsheets. Unfortunately, she’s less skilled at understanding Philipp’s motives—or her own, for that matter.

And while the film’s tense and eerie early scenes threaten us with a low-key thriller, the second half—filled with stilted, ellipses-filled business maneuverings—ratchets up the sense that something is horribly wrong in Yella’s new world; the latter part of the movie also eradicates any fears that this may turn out to be just a modern, German remake of a B movie from the 1960s. Interacting only with Ben, Philipp and whatever suits are trying to do business with the latter, Yella seems curiously remote from everything happening around her. At times, she’s besieged by the sounds of water and trees rustling in the breeze; at others, she finds that Philipp, the only friend she has, is as icy and volatile as Ben. And it isn’t too long before she takes a page from Ben’s dirty- business book and tries to strike an under-the-table deal herself—with disastrous results.

Yet somehow, this tightrope walk between the supernatural and underhanded business deals (call it Carnival of Michael Clayton) manages the neat trick of keeping its balance. Despite the outward appearance that Yella is drifting along with Philipp, obeying whatever requests he makes without a second thought, Hoss never lets us believe that Yella has found solace in apathy. Always waiting a beat before she replies (as if whatever she’s about to say takes a superhuman effort to put into words) Hoss gives a tight and restrained performance perfectly in tune with the taut tone of the film. And the two blond (and very Germanic) men in her life, Schönemann and Striesow, both radiate heat tempered by reserve. What’s most striking about the film’s tempo and atmosphere is the highly effective way that these performances become commentaries on Yella’s outlook. Both Ben, appearing from the gloom and ranting at Yella, and Philipp, screaming at her for a minor infraction, become oddly ominous when seen through Yella’s exhausted and haunted eyes. Even Philipp’s secret business plan, revealed to her on the bank of the river she so recently survived, feels frightening. The final scene may feel a little like déjà vu, but everything leading up to it will feel brand new.