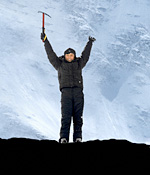 Anyone who has read the likes of Jon Krakauer’s best-seller “Into Thin Air” is likely to be fascinated—and maybe horrified—by the documentary “Blindsight,” in which a cadre of experienced climbers take six blind teenagers up a 23,000-foot mountain in the shadow of Mt. Everest. The climbers face the hazards Krakauer describes in gory detail—high-altitude sickness, impaired judgment from lack of oxygen, hypothermia, exhaustion, nausea, dehydration and more—all while walking blind through ragged, hazardous, unfamiliar terrain.

Worse yet, they brave the danger of justifying their culture’s attitudes toward the blind. Even some of the kids’ parents fully expect them to fail.

In her follow-up to 2002’s award-winning Amish documentary “Devil’s Playground,” director Lucy Walker shows how Tibetan attitudes toward blindness—often considered a mark of demon possession, or a sinful past life—can be more of a handicap than blindness itself. The six teenagers, ages 14 through 19, largely escaped miserable home lives and crushing prejudice via Tibet’s first school for the blind, founded by blind German activist Sabriye Tenberken. One amiable boy, Tashi, was sold into slavery as a professional beggar. Another, Gyenshen, spent years hidden in a back room because his family was ashamed of him. Walker addresses their stories with unsentimental frankness, observing their home and school life with journalistic detachment rather than trying to frame them into a slick affirmation story.

Reading a news story about a blind American who successfully reached the summit of Everest, Tenberken contacted the climber, Erik Weihenmayer, who suggested the mountain trip up Lhakpa Ri as a confidence-builder. “Blindsight” follows him, his team of guides and the students and teachers on their trip, but the film is more about life in Tibet for the blind and misconceptions about the limitations of blindness in general, than about one mountain.

Their story is deeply involving, all the more so because it isn’t simple or straightforward. The guides don’t always come across positively; they seem more driven to get to the top than to let their students enjoy the experience, which leads to fights with Tenberken. The film is often breathtakingly beautiful, and even as the students triumph over the naysayers, it’s melancholy knowing they aren’t sharing viewers’ experiences of their starkly gorgeous world, from the grim, memorial-lined stretch of Everest Base Camp to the vast primeval terrain of Lhakpa Ri.

“Blindsight” could use a stronger sense of focus; there are so many people involved that most of them blur together. Tenberken and Weihenmayer are amazing figures who deserve their own documentaries, but they get lost among all the other stories—including a touching but questionably relevant trip to find Tashi’s long-lost family.

The film could also stand to be braver about addressing its own core questions. Were, as the film circuitously implies, mistakes in judgment made along the way? Why take Tenberken’s students on such a potentially dangerous trek? What did they want to accomplish, and what did they learn? Even the kids are vague on these issues.

But “Blindsight” remains as enthralling for its insights into the character of climbers for its exploration of specific lives and current attitudes in Tibet. As with “Devil’s Playground,” Walker is admirably restrained, showing her young subjects with affection, but without romanticizing or editorializing. Her willingness to show the trip with all its troubles intact makes the film far more inspirational than it would be as a simple feel-good movie about overcoming adversity. And it’s certainly a good sign when the worst thing that can be said about a film is that it could stand to be three separate movies, each of which would probably be as absorbing as this one.