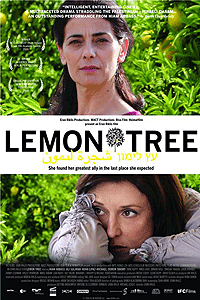 A beautiful example of how a film can explore grand themes in microcosm, Eran Riklis' Lemon Tree encapsulates the anger and frustration of the West Bank in the defiant act of a simple Palestinian village woman.

A David and Goliath story with melancholy overtones, the often-wry tale (apparently based on a true story) begins with the decision of the Israeli Defence Minister (Doron Tavory) to buy a villa on the Israeli side of a disputed border.

Separating him from "the enemy" is a lemon grove owned by a widow named Salma (Hiam Abbass), whose crop barely keeps her and her one aged worker alive. Unfortunately, a government minister comes with a full contingent of Secret Service, who immediately deem the lemon trees to be a security risk.

Thus empowered by dint of state security, the government sends Salma a letter informing her that her lemon trees are to be cut down so as not to provide a haven for snipers, and that she will be compensated for her loss.

Salma is disinclined to accept the compensation, firstly because of veiled threats by the village elder over accepting Israeli money, but mainly because the lemon grove is all she's ever had, and has been in her family for generations.

With no resources, she turns to a threadbare lawyer named Ziad (Ali Suliman), who agrees to take on the Israeli legal system, initially out of compassion and the prospect of career-enhancing publicity. His motivation is soon overtaken by actual feelings for the widow (whose severe-looking husband peers down on them constantly from photos).

The most subtle drama, however, is one carried on almost solely through eye contact between Salma and Mira (Rona Lipaz-Michael), the bored and guilt-stricken wife of the Defence Minister (whose sympathy for her aggrieved neighbor eventually causes political embarrassment for her husband). The two actresses almost look alike, and the two characters unknowingly share the empty-nest syndrome suffered by the emigration of their children to the U.S. -- Mira's daughter (Hili Yalon) is a Georgetown University student, while Salma's son (Loai Nofii) works in a Middle Eastern restaurant.

Eventually, the media circus that begins to envelope Salma reaches to the U.S., coming to

the attention of both children.

The near-romance between Salma and Ziad -- which attracts threats, yet again, from the village elder for its inappropriateness -- almost seems a distraction in this story. Salma becomes quietly empowered as her impossible legal struggle carries on, and simply taking on another man to protect seems retrograde. Thankfully, director Riklis himself seems to become bored by their relationship, moving the story on to its larger concerns.

But even when the story travels across the ocean and as far up the class ladder as the Israeli Supreme Court, it never loses sight of its photogenic title locale. The lemon grove is a symbol of purity and generations of toil, in jeopardy from the politics of bullying and victimization.