A film about unrequited love 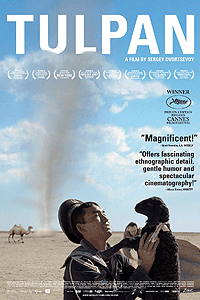 The fact that "Tulpan" is named after its most elusive character is an indication that this is a difficult film to pigeonhole, an indefinable mixture of genres and attitudes that is by turns off-the-wall and serious, comic and sad.

Set in the aptly named Hunger Steppe in a remote part of Kazakhstan, "Tulpan" is part ethnographic travelogue, part family drama and coming-of-age story, part goofy romance. Like "The Story of the Weeping Camel" of a few years back, it gives you an excellent sense of the world that produced it.

That Hunger Steppe looks to be one of the most desolate places on Earth, a spot where off-road vehicles and camels share the landscape and the only way to make any kind of living is by herding sheep. But to young Asa (Askhat Kuchinchierekov), it's paradise on Earth.

Recently discharged from the Russian navy, Asa is an earnest young man who thinks these trackless wastes are beautiful. A yurt, camels and sheep of his own are his fondest wish, but in order to get them from the local boss, he has to get married, which is harder than it sounds.

That's because there's only one eligible female in the neighborhood: Her name is Tulpan, and, even though Asa isn't allowed to catch so much as a glimpse of her face during the requisite meeting with her parents, this eternal romantic decides that (A) she's beautiful and (B) he's in love.

Tulpan, however, has other ideas. Either she's put off by his war stories about battling an octopus or she's troubled by the size of his ears. Whatever the problem, Tulpan says no to the marriage.

Buoyed by his close friend Boni (Tulepbergen Baisakalov), who spends a lot of time selecting pinups for the cab of his truck, Asa decides he's not going to give up on Tulpan. That's not good news to his taciturn brother-in-law Ondas (Ondasyn Besikbasov), whose yurt Asa calls home and who thinks the young man is kind of a fool.

Asa's sister Samal (Samal Yeslyamova) is more sympathetic, but she has her hands full with three children, including a son who memorizes the local radio broadcasts for his father and has the habit of running in and screeching "Breaking news!" like the world is coming to an end.

While Asa is trying to sort out his romantic life, he helps out with the family's sheep, which turns out to be not as easy as it sounds. With a deadpan charm all its own, "Tulpan" ends up dealing with some fairly serious questions on the order of how you make peace with a dream. Kazakh director Sergey Dvostsevoy (who co-wrote the script with Gennady Ostrovskiy) has a background in documentary film -- a graphic birth of a lamb sequence is one of "Tulpan's" memorable moments -- but its empathy with this hapless romantic is what gives "Tulpan" its charm.