Actively gazes on 20-something eclectic aimlessness 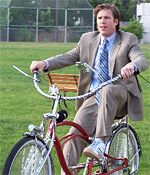 Scripted and thesped by a pair of improv comedians and deftly directed by tyro helmer Monty Miranda, the likable but lightweight 2007 slacker comedy "Skills Like This" coasts on laid-back absurdist rhythms as three twentysomething pals scramble to redefine themselves in the wake of one's self-affirming discovery of his talents as a thief. The recent worldwide economic nose-dive imbues this Denver-set pic with nostalgia for the days when disaffected youth robbed banks because of anomie instead of economic necessity.

Max (scripter Spencer Berger), who sees the curtain brought down prematurely on his writing career when his play "The Onion Dance" triggers his grandfather's massive coronary, makes a spur-of-the-moment decision to rob a bank. Emboldened and liberated by having found his true calling, he embarks on an odyssey of impulse-driven crime, unconcerned with the loot and often giving it away.

Pic lags noticeably, though, during dumb-and-dumber interludes tracing the impact of Max's new vocation on best buds Dave (Gabriel Tigerman, who shares a story credit with Berger) and Tommy (producer Brian D. Phelan). Dave freaks out at the threat to his comfortable if despised junior exec job, while layabout Tommy, way inspired by Max's gun-toting glory, dons suit and tie to give gainful employment a whirl.

Less a complement to the main narrative and more a series of loosely connected skits featuring Tommy's passionate love for his bicycle, "Gloria," and his inconceivable cluelessness about socially permitted behavior, subplots tend to vitiate pic's informal flow.