From the director of Manufactured Landscapes 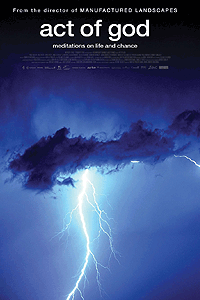 You and your friends get hit by a ball of lightning. The person standing right next to you dies, but you don't. You just get knocked off your feet.

What would you think about that?

How would you think about that?

Was it chance? Dumb luck? A trick of science? Divine intervention?

That all depends upon who you ask, according to Act of God, a brilliant new documentary from Jennifer Baichwal that examines the metaphysical effects of being struck by lightning. Baichwal's movie ventures into the places where science and religion get all smushed together, where the math of probability and the facts of electrical differential meet the human need to find a deeper meaning behind the apparently random and destructive.

Act of God has a terrific cast of characters. Baichwal interviews people whose lives have been changed forever by lightning, including the playwright James O'Reilly, who has written about the strike he survived almost 30 years ago, and who acts out, in chilling (and frankly riveting) detail, the events as he recalls them. Some of the people involved want to talk about God and heaven, but O'Reilly is having none of that.

Then there's the American writer Paul Auster, whose experiences as an adolescent at camp include the death of a fellow camper via lightning strike. Both O'Reilly and Auster say they waited many years before writing specifically about their experiences, but the events seem to have found a way into their writing long before that.

Baichwal interviews the religious family members of people who were killed by lightning in Mexico (as they were visiting a shrine), films the energetic festival and parade dedicated to Shango, God of lightning, and talks to a French lightning aficionado about storms and the soul. She also has a sequence with guitar improv hero Fred Frith, who talks about electricity and the brain, and how the act of creation takes place somewhere between meaning and chance.

Act of God is the coolest movie. It's also visually magnificent. Baichwal manages to convey all the power and majesty -- and menace -- of lightning with just the sort of gobsmacking footage that keeps you glued to the screen. Act of God fearlessly approaches the natural and the supernatural, and the result is visceral, intellectual, heartbreaking, delightful and instructive, all at once.