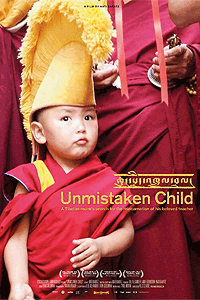 To accept what happens in "Unmistaken Child,'' you don't have to believe in reincarnation. You do, however, have to believe that the people in this movie believe in it - that the idea of a soul transmigrating from a dying Buddhist lama to a newborn boy is part of the conceptual stew in which they and their society swim every day.

This documentary by the Israeli filmmaker Nati Baratz observes the anointing of a spiritual heir without the usual devices designed to make Western audiences comfortable. There's no voice-over narration, a minimum of scene-setting - no ethnographic framing, in other words. Nor is there a political subtext: China and its treatment of Tibet are never raised.

We simply are present from 2001, when the 84-year-old Geshe Lama Konchog died, to 2005, when the toddler recognized as his reincarnation was presented to the Buddhist community of Nepal and beyond. You could argue that the film would be stronger if it explained more fully and asked more questions, yet "Unmistaken Child'' stands as a window on a beautiful and mysterious world. The questions it leaves hanging are for us to untangle.

The film's central character, actually, is Tenzin Zopa, the tenderhearted young acolyte whose life, since the age of 7, has been devoted to serving Geshe Lama. Upon his master's death, the grieving Zopa is instructed by the Dalai Lama himself to seek out the reincarnated boy, a task he feels unsuited for. How can a mere follower, he asks, spot the divine? On one level, "Unmistaken Child'' is a moving coming-of-age story in which a shy student matures into a teacher.

Astrological charts are consulted, lamas conferred with, and all signs point to the remote Tsum Valley on the border of Tibet. The midsection of "Unmistaken Child'' dispatches Zopa to the region's villages, seeking a 1 1/2-year-old boy who will recognize Geshe Lama's prayer beads. Zopa's the prince and the beads are the glass slipper; the parents all understand what's at stake. (One woman pushes her baby forward like one of the stage mothers in "Brüno.'') Eventually, one boy responds - a lively, fat-cheeked little terror - and before a group of monks he successfully chooses Geshe Lama's belongings from a group of objects.

Is he coached? Are there body signals we're missing? The film will frustrate literal-minded viewers who want answers rather than dispassionate sympathy - who want the matter proved. Instead, "Unmistaken Child'' examines the deeply affectionate relationship that arises between the boy - eventually renamed Tenzin Phuntsok - and the young man he calls "Big Uncle.'' What's most remarkable is how the child seems to understand and accept the significance of his new role, serenely greeting crowds of the devout and at one point looking at a photo of the deceased lama and saying, "That one is me.''

At the same time, he's still a kid, and in an earlier scene the movie weighs the cost of becoming divine, when his parents leave him with Zopa and he dissolves into tears. "Unmistaken Child'' hints that conferring nobility can create nobility - this is how the current Dalai Lama was selected, after all - and also that childhood is a very hard price to pay.