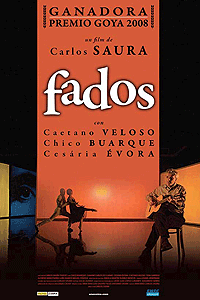 Saura, being a man of oomph (he's 77 now), orchestrates excitement whenever he can, which is to say always. What "Fados" lacks in jaw-dropping sexiness it makes up for in casual sensuality. The film, which opens today at the Museum of Fine Arts, consists of more than a dozen performance pieces - singers, guitarists, percussionists, dancers, many of them renowned, many revered - filmed in a closed studio. It's theater treated as cinema.

In the opening sequence, a parade of revelers and musicians fills a gallery space. The participants blow whistles and dance their bodies toward and away from each other, while drums beat and beat and beat. The showcase is more camera-ready rite than full-on party, but you get the gist: Wow. From there the movie unveils itself as a revue reconstituted as a series of tableaux - a minimal setting (screens, scrims, curtains, floor) and places for the musicians to sit (Saura keeps them and their instruments visible for most of the numbers).

The idea, in part, is to take us through a history of fado, and Saura, who conceived the film with Ivan Dias, appears to have thought of everything. We get ballads; two-turntables-and-a-microphone hip-hop; a number that, based on the chic-tattered costumes, could be from "Les Miz"; another number that uses a series of clips from the forgotten romanticist director Jose Leitao de Barros's, "A Severa," from 1931. Some choreography seems from the Pina Bausch school. One sequence is set to protest footage from Portugal's Carnation Revolution, in 1974.

The camera watches everything with adoration, and gradually you start to wonder how many different ways you can shoot a man playing Portuguese guitar (not too many). But if you're wondering about the staging, then you're missing the musical point. And yet here I am wondering. Saura's conceit with these filmed performances is that he can stage the art while, on his terms, keeping the essence of what makes it great. That staging strategy worked electrically well in "Flamenco" and "Tango," reasonably so in "Salome," from 2002. In what's called Saura's flamenco trilogy from the 1980s ("Blood Wedding," "Carmen," and "El Amor Brujo"), the movie engaged the earth. As a production, "Fados" is pretty with its reflected surfaces and many projected images. But at times it hurts for the bite and texture of life outside that studio. For all the dolorous singing about and shots of streets, it'd be nice to hit one.

Smartly, Saura often has the artists look right into his camera, a move that italicizes the music's directness. Of course, my favorite moment stars a pair of closed eyes. Argentina Santos brings great wisdom to a song essentially about the Portuguese concept of "saudade," which for lack of a better word is nostalgia of sorts. She doesn't look at us while she sings but she does so with such feeling that there's no need to wonder what she sees. You can hear it.