Music doc that pulsates rhythm in the classic sense 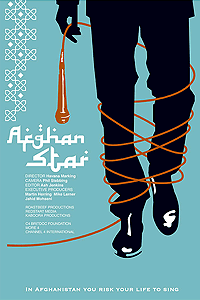 It would have been easy for U.K. journalist and TV producer Havana Marking to turn her feature documentary debut "Afghan Star" into a weepy, patronizing view of a Third World nation's people rising above their travails by means of song.

But Marking's surprisingly astringent film resists such temptations even while following four heartbreakingly brave finalists in the hugely popular "American Idol"-like talent show the film takes its name from, a melodramatic arc if there ever was one. Maybe it's Afghanistan itself, a beautiful but stark landscape that doesn't leave room for such softness. There's also the songs being performed, pulsating with garment-rending romantic hyperbole -- "The bend of your eyebrows is like the sting of a scorpion" is one illustrative example -- that would baffle your average "Idol" contestant.

At the crowded, jury-rigged Kabul studio where "Afghan Star" is filmed, there is no room for pampered prodigies. The finalists Marking follows in riveting fashion are all pulsating in the classic sense, seeming to carry the entire weight on their shoulders of their families and respective ethnic groups (all come from different parts of the country).

The two energetic young men, Rafi and Hameed, have it hard enough, spending most of their time convincing the public to text-vote for them during the next episode. The intensity of these campaigns with street teams and posters, rivals the most hard-fought election, a point driven home when one man notes that these frantic operations are the only democracy many young Afghans have known.

Barred by their gender from cadging votes, the two female finalists, Lima and Setara, have to rely just on their performance of overwrought love ballads in front of a charged studio audience. But as in any televised reality competition, nobody wins by talent alone.

In a country driven by religious radicalization, the mere appearance of an Afghan woman on television can mean trouble. (Marking cleverly deploys footage of Kabul circa 1980, when women walked the street without veils.) Having two women in competition turns the show into a referendum on the state of the nation.

The fact that Setara is outspokenly independent and even dances during her performance makes her supposed immodesty the subject of vigorous street debate. Given the level of passion that Marking captures with her roving camera, it is sadly no surprise when Setara receives death threats after merely letting her veil slip off her head while singing.

Although sadly rife with gut-clenching moments as those, "Afghan Star" is most thrilling when depicting the show's delicately balanced effort to bring Afghans together despite their fractious ethnic and clan boundaries. Wholly one-third of the country, some 11 million people, watched the finale. Marking's film is too astute to pretend that such fleeting things can bring about peaceful democracy, but it's also perfectly aware that they certainly can't hurt.