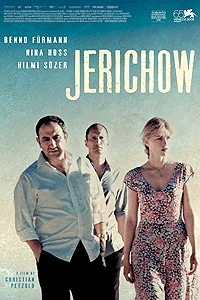 "Jerichow," a compact and somber movie by the German director Christian Petzold, proves that, in film as in engineering, the triangle is the strongest and most efficient structural principle. In essence a variation on "The Postman Always Rings Twice," James M. Cain's infinitely adaptable tale of lust, envy and deceit, "Jerichow" arranges its three main characters in a familiar pattern. There is a rich guy; his bored, beautiful, blond wife; and a rugged stranger, down on his luck and ready for action. What more do you need?

Mr. Petzold, whose previous films include "Yella," a prizewinner in Germany in 2007, respects the lean and pulpy genre requirements of the story and does not burden it with self-conscious artiness or metaphor mongering. The plot is simple, with just enough kinks and coincidences to keep the audience a little off balance as we await the dreadful developments that seem to be lurking around every corner.

At the same time, though, certain details, hovering near the edges of the drama, hint at an intriguing subtext. While they are too needy, greedy and confused to be allegorical figures, the rich man, his wife and the stranger nonetheless act out a grim little fable of social relations in modern Germany. The town that gives the movie its name is a nondescript spot in the former East Germany, where a road still bears the name of Friedrich Engels and where capitalism still has a somewhat primitive, half-criminal feel.

Certainly Thomas (Benno Fürmann), the rugged stranger, is not thriving. After burying his mother he returns to his childhood home, where he plans to live. But a loan shark takes the money Thomas has stashed in a tree house and leaves him lying unconscious on the lawn.

Thomas, a sullen former soldier who served in Afghanistan before receiving a dishonorable discharge, finds work harvesting cucumbers before fate takes him to Ali (Hilmi Sözer), a prosperous entrepreneur with a chain of snack bars and, of course, a bored, beautiful wife (Nina Hoss, who played the title role in "Yella"). Her name is Laura, and Mr. Petzold delays ignition of the inevitable spark between her and Thomas so that Thomas (and the audience) can get to know Ali a bit better.

Even though Ali is, in some ways, a purely functional figure in the narrative — both the heavy and the patsy, the target of betrayal and vengeance, the obstacle to the romantic fulfillment of the adulterous couple — he also turns out to be the most interesting and complicated character. A sharp, sometimes brutal businessman, he shows an odd mixture of guile and helplessness, his need for control weakened by sexual jealousy, a fondness for vodka and a disarming tendency toward self-pity.

This sometimes expresses itself as harsh self-awareness. "I'm stuck in a country that doesn't want me with a woman I bought," he says to Thomas at one point, exposing the emptiness and alienation beneath his success. A Turkish immigrant who has spent virtually his entire life in Germany, he is, despite his wealth and the veneer of swaggering confidence he likes to project, a permanent outsider and potential scapegoat.

Not that Ali is an innocent victim or a good soul by any means. He is domineering, vain and sometimes violent. But the alliance that Thomas and Laura — perfect if somewhat battered specimens of the fair-skinned, muscular Teutonic ideal — form against him has a queasy undercurrent of xenophobic payback.

No one in "Jerichow" is entirely deserving of sympathy, which gives the film a detached, clinical feeling underlined by the director's habit of observing emotions rather than evoking them. Mr. Fürmann and Ms. Hoss, even when gripped by sexual fervor, display a reticence that blunts the force of the story and makes their turn from adultery toward more serious and criminal transgressions seem dumb rather than passionately reckless. And the reversals and revelations that conclude the story are a bit too neat and clever to resonate much past the final credits.

But there is nonetheless something haunting about this film, a sense of desperation and defeat that seems less like a generic convention than like a genuine insight, an intuition into what can happen at the crossroads of lust, loneliness and materialism.